Lots of stuff happening around here.

Second, the draft for the first book of The Kreisens, book 3 in Shijuren, was sent off to the editor last week. I’m hoping for a release date around 1 June.

Third, there’s progress on the audiobook front. I’m hoping for September for A Lake Most Deep. I will probably do a Kickstarter in May for that project.

Fourth, I’m on the road in Canada right now. I had a wonderful time at the coronation of Nigel and Adrielle. Talked to a bunch of old friends, made some new ones, and promoted the next edition of A Lake Most Deep as well as showed off The Eyes of a Doll. A fun and useful day.

I’m headed to Ad-Astra this upcoming weekend, so if you’re in the Toronto area come join us. I’m in four panels, plus a reading. They are: 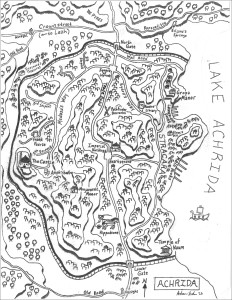 I’m so excited to announce that Adam Hale has drawn us all a map of Achrida.

This is just one of the changes that have kept me so busy that I haven’t had a chance to blog.

The map is merely one of the updates to a forthcoming First Anniversary, Second Edition of A Lake Most Deep. These have been submitted to Amazon in both ebook and paperback format, and are in the process of getting reviewed. Hopefully both will be active in the next day or so.

The changes to the second edition are mostly minor. The map is a big change, of course, but mostly it’s cleaning of some mistakes I made publishing my first book and editing to fix some typos and grammatical errors I found. Also, to make it more consistent with The Eyes of a Doll, I had Kellie edit A Lake Most Deep.

Also, I had Patrick change the cover to make it match the much better setup on my second book. This is more obvious with the print version, but people such as Cedar Sanderson who pointed out that my name needs to be in big, bright letters can now simply laugh at my inability to self-promote instead of laughing and asking when I’m going to fix that.

As a side note, I want to thank all of those who took the time to tell me that one thing. I’m getting better, but I’ve never been good at putting myself forward.

In any case, the one substantial change is an addition requested by Romaine Spence. He pointed out that I never answered what happened to the Notes of Naum. In response, I added a few paragraphs. He’ll also get an autographed copy of the new edition for his help.

What will this mean to those who bought the first edition? Well, a total of 125 of the first edition were printed. When I become the biggest fantasy author on the planet, these will be worth something. So tell your friends about me, and consider it an investment in your future.

For ebooks, I had hoped that Amazon would allow people to download the new edition for free. Unfortunately, they will not. I suppose I understand that, from the perspective of things that routinely get new versions, but that doesn’t help us.

What I will say is that if you bought the 1st edition of either version of the book, I will send you an email with the map and the extra paragraphs. It’s not ideal, but I’m afraid that’s what it is.

Not about A Lake Most Deep, but about the next book. I’m getting very close to sending the first book in an epic fantasy set in Shijuren sent to Kellie. Edward is a minor character in this one, and it talks about some of his experiences in Ivan Yevgenich’s izba.

More to come about that project soon.

I want to thank all of you who bought the first edition. I feel bad that, in a sense, I am not being fair to the ones who were there for me at the beginning. I can only say that I’m learning, trying to get better, and I want to continue putting quality product out there.  And that I thank you for your patience and forbearance.

Enough for now, I have to go save Valentin, one of the characters in the next book.